Winner of the National Living Culture Ethnology Prize, she began singing at the age of four. Vanesa Muela began singing at the age of 4, and gave her first performance at the Teatro San Viator de Valladolid when she was just 6, singing twelve traditional songs live. Since then she has given more than 3,500 concerts throughout Spain, in various European countries, including France, Portugal, Italy, Germany, Austria, Sweden and Greece, and also in Brazil.

Vanesa Muela is a singer and multi-instrumentalist firmly rooted in tradition and a believer in the purity of the music of yesteryear. She has the uncanny ability to bare the soul of the traditional songs she has learnt directly from her elders, in every one of her concerts.  She conveys like nobody else that magic, energy and feeling found in folk music, that ancestral wisdom that she has the ability to share with the public in an entertaining, enjoyable and interesting way. Vanesa will take you on a journey through the senses, following the melodies of the jotas, fandangos, seguidillas, ligeros, agarraos, charradas and corridos accompanied by the sounds of tambourines, shells, spoons, guitars and cribas. 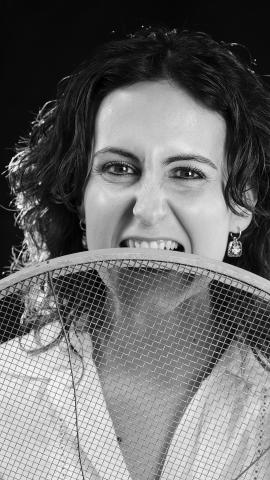